Maracay in Venezuela – Let the Magic Allure You

“There are no foreign lands. It is the traveler only who is foreign.” ~ Robert Louis Stevenson

There are only a few countries on earth with beauty so overwhelming that the phrase ‘heaven on earth’ does not seem to be an exaggeration and Venezuela proudly stands among them. Home to the tallest waterfall in the world, the Angel falls, Venezuela is one of the most sought-after and most talked-about travel destinations in the world.

Venezuela is an eccentric blend of attractions. While every city in the charming country promises a traveler a trip of a lifetime, it is the magical Maracay that steals the show. Maracay is an ideal destination for your holidays as it resembles a bewitching diamond exuding an enticing charm. Despite the fact that Maracay is Venezuela’s industrial and commercial hub, it has an almost unearthly appeal that is every traveler’s undoing.

The city’s climate has played its role in making Maracay a tourist paradise. The city experiences pleasant weather throughout the year with rainfall that is intermittent. The city was founded in the 18th century occupying the northern region of Venezuela. Remnants of the famous Venezuelan leader Juan Vicente Gomez are in this city exhibited at the frequently visited museum Mausoleo De Gomez.

Maracay is a city of marvels. From state-of-the-art aviation tools to the fighter planes, the famous aviation museum features everything that can interest anyone. The weapons showcased here make it a must-visit spot on a trip to the city. 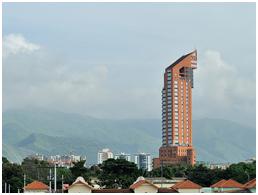 Countries in South America have a penchant for preserving their cultural heritage and Venezuela is no exception. Because of this reason, myriad of structures, cultural exhibits and artifacts are scattered about Maracay hinting at the country’s glorious past. In addition to all such spectacles, some of the attractants justifying raving reviews they receive include the Museum Of Modern Arts, Opera House, Anthropological Museum and the list goes on and on.

Maracay truly justifies the moniker that it has received. It is famous as Cuidad Jardin, which translates to ‘The Garden City’. Maracay is set against a backdrop of mountains that inspire an almost poetic beauty for the area. With lush green scenery carpeting the entire landscape, the city is a haven of countless trees and gardens. All that the city has to offer indeed makes it a truly fascinating place to travel to.

The entrance to the city is very famous with an inspiring inscription stating the city as the crossroads of all roads. The city also has some stunning monuments such as the Bolivar Plaza and the La Maestranza Cesar Giron. The Sindoni Tower with its remarkable architecture further adds to a traveler’s pleasure.

The city has undergone some remarkable transformation to become what it is today. Despite going through all the modifications, the city has retained its colonial style that has heightened the cultural value of the city. For those seeking an absolutely relaxing respite, Maracay is a treasure trove of attractions and a trip to the city is truly rewarding.