Maturin is the capital of Monagas, one of the 23 Venezuelan states. Also known as the oil capital of eastern Venezuela, this metropolitan city is home to over 401,384 people. It is also the transportation centre of the state for its several routes connect it with the northeastern parts of the country.

If you are planning a visit to this city, a number of magnificent places, shopping centers and other tourist attractions await you. To find the exact location of the city, click here.

The closest airport to the city is Maturin Airport which is located about 2.5 kilometers from downtown. 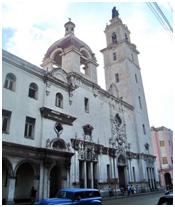 One of the major tourist attractions of Maturin is Bolivar Square which is decorated with a number of beautiful trees. Just being around these trees makes you feel good and fresh. Near to this square is the ‘Government’s Palace’ and the San Simon Church. This historical church remained the main religious building until the Cathedral was built.

This modernistic building was built in 1981 and is one of the most stylish Cathedrals in Latin America. A number of tourists are allured towards its modern design and beautiful decoration.

There are several splendid parks that are worth a visit while in Maturin. On your trip to the city, do not forget to pay a visit to the ‘Municipal Park La Guaricha’. It is a beautiful park located in the Bolivar Avenue. It has a small zoo, a train and an artificial lagoon.

Some other worth watching parks in Maturin are:

Local festivals such as the colorful Maturin Carnival garner a lot of tourists’ attention. This carnival is organized by the regional government with the help of financially stable local companies and individuals.

In Monagas State, the Guacharo Caves is one of the startling locations known for its strange rock formation. It was discovered in the 1700’s and is home to some of the unique species of birds.

This is a wide network of rivers with more than 60 channels. It flows from the Orinoco River to the Atlantic Ocean. You can also take a boat from there to reach the Boca de Tigre Camp, an amazing camp located on the other bank of the river.

There are a bunch of busy shopping centers in the city from which you can buy traditional memorabilia. For a memorable shopping experience, visit Petro Oriente and Mongas Plazas.

Where to Stay When in Maturin

This Posada consists of several private villas that are equipped with modern amenities. Each villa has its own bathroom and TV lounge. The rooms are spacious and the picturesque environment around them is just beautiful. Also the staff is quite friendly and cooperative

The restaurant’s menu primarily consists of grilled items and upon request they also prepare fish that visitors catch from the nearby Orinoco River. For more information and to book a villa online, click here.