Top 3 Places to Visit in Maracaibo

Maracaibo is the second largest city of Venezuela. It is present in the state of Zulia that has a culture very unique as compared to the rest of Venezuela. More than 1.4 million people reside in Maracaibo and thousands of tourists visit it each year. The culture of Maracaibo is considerably influenced by the colonization that occurred several times. It was colonized by Spain in the sixteenth century. While visiting Venezuela, it is imperative that you visit Maracaibo and see the city’s famous landmarks.

We recommend you the following three places to go to.

Lake Maracaibo presents a very serene environment. Research shows that it is one of the world’s oldest lakes and dates back to around 30 million BC. It is also South America’s largest lake with its water flowing from several rivers and the Caribbean Sea. With natural wonders and a little development along the coast, the lake is a perfect picnic spot. Often birds such as vermilion cardinal, buffy hummingbird and pygmy swift are spotted here. One of the noteworthy features of the lake is the large amount of duckweed

present on its surface. In spite of efforts to uproot the weed including chemical and biological treatments, the weed returns.

Lake Maracaibo is used as a shipping route to Maracaibo port. Next to the lake is General Rafael Urdaneta Bridge. It is the biggest concrete bridge in the world. The location of Lake Maracaibo is also witness to Catatumbo Lightning. The phenomenon occurs right above the mouth of the area where the water of Catatumbo River transfers to Lake Maracaibo.

La Vereda del Lago Maracaibo is Spanish for The Village of Lake Maracaibo. Situated next to Lake Maracaibo, the village now has developed into a park. It is visited by thousands every day because of the open space and large number of facilities the venue contains for the visitors both local and foreign.

Visitors indulge in a number of activities such as paintball, roller skating, mountain climbing, exercising, cycling, jogging and playing various other games. Others relax by having edibles such as caramel apples, sandwiches and candy from the many kiosks set up in a row. Public bathrooms have also been set up.

In short it is a great time for you to visit with friends or family and relax while viewing the cheerful crowd and natural scenery. 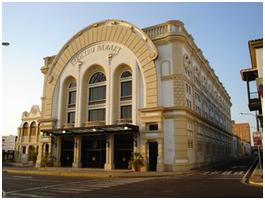 Teatro Baralt is Spanish for Baralt Theater. It was founded in 1883 but was demolished in 1928. Later in 1932, the theater was erected yet again at the same location. The theater was shut for twelve years from 1986 onwards. In 1998, it was reopened with the help of the not for profit organization FundaBaralt. The reopening was carried out by FundaBaralt under the supervision of University of Zulia.

Today it is Teatro Baralt is recognized as one of Venezuela’s most important cultural institutions. Different types of art performances are carried out in the theatre in a scheduled manner. You can find out details about the performances at Teatro Baralt here.