After having visited Parque Recreacional Sur, Acuario de Valencia and Plaza de Toros Monumental de Valencia, you must have realized the ravishing beauty that lies in Valencia’s natural features and culture. If you plan to stay longer in the beautiful city and wish to visit more places, the following three venues should be your choice. 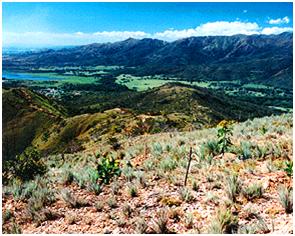 Cerro Casupo Municipal Park is Spanish for Hill Municipal Park Casupo. It is one of the biggest parks in the city with an area of 693 hectares according it its website which you can visit here.

Given the park’s extensive mountainous area, it contains several types of flora that are unique to this part of Valencia. The vegetation that grows in this park can be classified in three categories – open grassland, forests and wooded grassland. Cerro Casupo Municipal Park is similar to Caracas’s Jardin Botanico because it draws large numbers of groups of students, academicians and plant enthusiasts. The vision of the park is to raise awareness about the rare species that grow in Casupo. Groups are provided with tour guides upon request. The guides inform the visitors about the flora, fauna, landscape and ecology of the park.

The climate of Cerro Casupo Municipal Park significantly varies depending upon the time of the year. The climate is influenced by different factors including the Lake of Valencia and winds originating from Portachuelo. Rainfall occurs from April to November, reaching its peak in August. The time when the park does not see rainfall i.e. from December to March, deciduous plants lose their leaves and herbaceous vegetation dries out. The climate of the park is identified as that of a tropical dry forest.

Venezuelans are very proud of their history and of heroes who fought for its independence and sovereignty. Hence, General Jose Antonio Paez, who helped separate Venezuela from Gran Colombia, is highly venerated as a national hero. He was also the country’s first president.

His house, called Paez House, is visited by both locals and tourists. It is a beautiful colonial style building with courtyard, halls and corridors and a basement that was once used as a prison. It still hosts nine frescoes by the artist Pedro Castillo (grandfather of the Valencian artist Arturo Michelena ), which show scenes from the Battle of Carabobo.

Parque Negra Hipólita is Spanish for Black Park Hippolyta. It covers an area of 0.7 hectares and consists of several cultural centers, concert halls and gardens. There are many monuments in the park such as Black Statue of Hippolyta, Statue of Fernando Penalver, Sculptor of the Miraculous Medial, Marina Square, Bolivarian Plaza, Monument to the grandson of Saman de Guere or Chromatic or photo chromic Labyrinth.

Geographically, Parque Negra Hipolita is located in the norther part of Valencia and is part of a larger park area. This larger area is divided into two parts – Parque Fernando Peñalver and Parque Negra Hipolita. The management of the park aim at providing an entertaining as well as an education experience for the visitors.