Things to Do In Maracay- Visual Treats to Cherish

“The journey itself is my home.”

Who does not know about Maracay, the marvelous Venezuelan city that sweeps travelers off their feet? With its many sensational sights promising everyone a trip-of-a- lifetime, the city has everything to encourage holiday-makers into visiting it again and again.

Maracay is one of the very few cities that offer travelers diversity of landscapes. The city, spread on a massive area, has an unearthly appeal and engulfed in an air of exquisiteness, it inspires nothing but awe. Maracay is dotted with endless attractions that have earned it a reputation that will not wane anytime soon.

The city is known for its hypnotizing allure casting an invincible spell on all those coming to the area. The city is home to some of the most talked-about sites in Venezuela leaving travelers completely besotted. From the sepulchral attraction of Gomez Mausoleum to the eccentricity of Plaza Bolivar, from the magnificence of Plaza Girardot to the extravagance of Garden Of Delights, it is the refined attractions in Maracay that transform a simple trip into a phenomenal experience.

Planning to go to Maracay and want to visit the most notable attractions? Get ready to list worth-visiting lures that you just cannot afford to miss on a trip to Venezuela.

Being the founder of the exotic Maracay garden city, General Gomez is a much appreciated legend for his exemplary work not in the country but in this city as well. The general was laid to rest at this site and the tall and proud structure is a celebration of his seemingly endless accomplishments. The mausoleum is not just one of the most visited sites, it is also a prominent feature of the city tours. 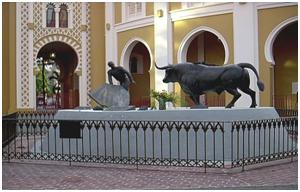 The symbolic and striking square features one of the most beautiful cathedrals in the country. Located in the heart of the city, the plaza prides itself on the swarm of exotic buildings here. Several religious festivals are hosted by the plaza while excursionists cannot help but rave about the beauty of the obelisk. The memorial was built in 1897 to pay a tribute to those who sacrificed their lives for freedom fighting against Spain.

As the name implies, the site is indeed a delighting and utterly pleasing entity. With its aesthetic appeal, it is a ideal place to visit if you are in a mood for a casual walk. The area is full of lush green trees, a fabulous fountain and a huge assortment of plants accentuating its swerving pathways. What further sweetens the deal is the zoo featured here that never fails to strike a chord with those coming here.

Get a break from the din of life and immerse yourself in the charming retreat.