Located alongside the Caribbean coast, Maracay is one of the most important cities in Venezuela,. It is the capital of Aragua, one of the 23 Venezuelan states and is home to over 750,000 people. The estimated population in its surrounding exceeded 1 million in 2008.

It is said that Bishop Diego de Barios y Sotomayor laid the foundation of this city in 1701. However, Maracay saw huge development during the dictatorship of Juan Vicente Gomez. Gomez not only vanquished this city, he also initiated some giant construction projects. A large number of these buildings have now become historic landmarks.

Each year thousands of people head to this amazing travel destination. If you too want to be a part of this crowd, stay with us as we are going to tell you how to get there and which places to visit for sight seeing.

Since Maracay does not have its own airport, you can reach there via a plane that lands either at Simón Bolívar Airport, Maiquetia or at International Airport Arturo Michelena, Valencia. Then from there a taxi could take you to Maracay, which is not so far from both the locations.

The best time to visit Maracay is when the temperature is nearly 30 degrees centigrade. Fortunately, the city has this optimum temperate throughout the year which is ideal for sight seeing and other indoor and outdoor activities.

Inaugurated in 1930, this park is located in the heart of Maracay. It was built to honor the services of Simon Bolivar, a liberator in the largest squares of the country of its time.

Plaza Bolivar of Maracay also garners a lot of attention because it is surrounded by other significant landmarks such as Opera de Maracay and the old building of the governor of Aragua.

The park was adopted as a National Historic Landmark in 1994. Not only is this park spacious enough for visitors to indulge in a number of recreational activities, it also has a large variety of animals that live there. 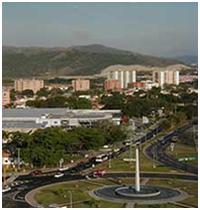 This park is the most preferred location for recreational and leisure activities in Maracay. It is located between Constitution Avenue and Bolivar. The park is very well-managed and has its own safety, hygiene and health systems.

San Jacinto Park is packed with a number of kiosks, restaurants and stalls that offer delectable national and international dishes. It is also a good place to buy local hand-made and ceramic items. The reserved space for model planes, stomach-churning rides and other worth-watching landscapes are some of the specifications of this park.

This is a must visit if you get amazed by aerospace technology. Equipped with a number of old civil and military aircrafts, this museum is managed by the National Aviation Venezuelan authorities.

The main objective of this museum is to conserve and preserve different kinds of combat aircrafts that come from several airbases across the country. The museum which is primarily occupied by aircrafts holds a lot of importance to Venezuela as it is the third largest aviation museum in Latin America.